Upon a visit to Key West, you might notice one specific and interesting member of the population: wild chickens. These beloved creatures roam the streets or find homes near local hotspots. Learn more about the infamous Key West Gypsy Chickens. 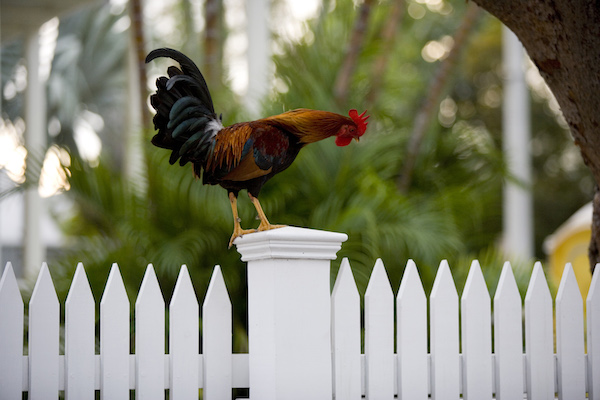 Where Did the Chickens Come From?

A question asked by many of our Island visitors is: "what's up with the chickens? Key West chickens that roam the streets are descendants of jungle fowl that originated in Cuba and the Caribbean islands. These birds were brought here by our island ancestors and used as food.

Chickens were also used in the now illegal sport of cockfighting. Many of these birds escaped their enclosures or were just released when cockfighting became illegal. The feathered animals are now known as Key West Gypsy Chickens. Since Key West is a no-kill island, so it didn’t take long for the population of chickens to explode on this two- by four-mile island!

How Is the Chicken Population Controlled? 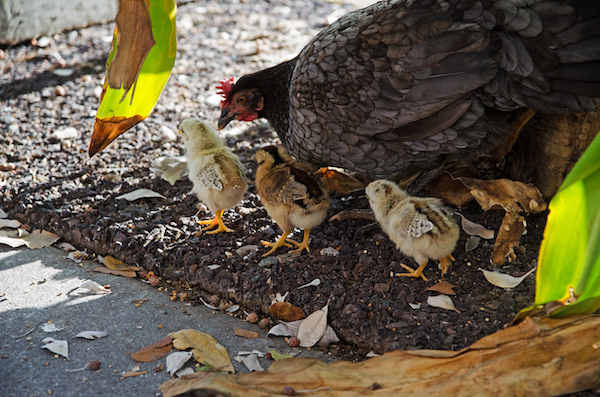 When the population of chickens gets out of control and the predatory hawks migrate out of town, Key West Wildlife Center will loan residents a humane chicken trap to collect unwanted birds. Once caught the resident brings the chickens to the center. There they are provided care and sent off to various farms on the mainland. On the mainland, they are prized for their eggs and go to work as “organic pest control” workers.

At these locations they live free range just like they do in Key West, but safe from traffic and well cared for.

Interested in adopting a Key West chicken? The wildlife center will gladly let people from outside of the Florida Keys adopt a bird. An agreement has to be signed stating that the bird is to be a pet and not used for meat. All adopted chickens come with a letter attesting to their authentic breeding as a “Key West Chicken”!

We Love Our Chickens

The beautiful Key West chickens are represented as the business logo for At Home in Key West. Nothing says “at home in the keys” like one of our chickens! Even our Maintenance trucks are called the Rooster Fleet. If you are in town and hear a truck horn that sounds like a rooster…it’s our Rooster Fleet!

Want to hang out with the Key West Gypsy Chickens? Book your Key West vacation rental with us and begin planning your trip today. Use our trip planning guide and things to do to help.