Key West has been a place authors and many other creative minds have visited and/or lived. Perhaps it is the wonderful weather, friendly laid back people or beautiful scenery that draws some of the most creative minds to Key West. There are many authors, artists, and musicians etc that have graced us with their presence and work here in Key West. We have a chosen a few to discuss.

Ernest Hemingway is one of the top authors of Key West. In 1931 Hemingway purchased a home here in Key West and is one of our top tourist attractions!

Often called one of the most popular serious writers of the 20th century 55 years later his books are still selling year after year. Hemingway was a huge fan of, bullfighting, hunting, and fishing. He was very interested in war, maybe due to serving in the Italian Army during WWI.

A lot of his work seemed to be a glimpse into the life he experienced. His unique yet simple way with words will give you the feeling of being on a world win adventure! 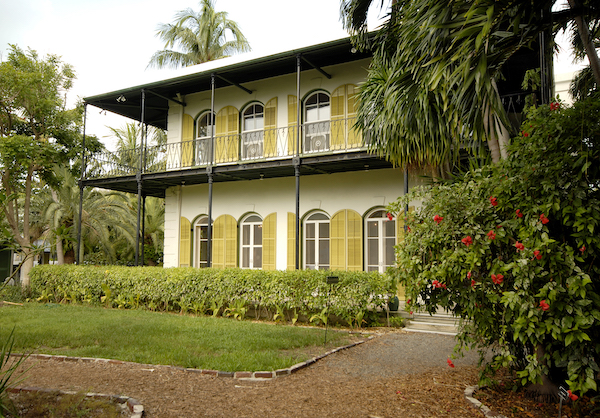 Visit the Ernest Hemingway Home and Museum, which is where the author lived and worked for more than 10 years. The museum is just as famous as the home of Hemingway as it is for the six-toed cats that still reside there today.

Judy Blume is well known for writing children’s and young adult fiction. Blume began writing in the 1960’s. Starting off Blume encountered a lot of rejection. Finally, in 1969 she became a first-time author with her children’s book “The One in the Middle Is the Green Kangaroo.”

The books that Blume has written are perfect for parents to give their pre-teens and some for elementary aged children. She covers a lot of topics that teens struggle with.

Judy has published a few adult novels but children and young adults are her main audiences. Blume splits her time between NYC and K.W. if you are lucky you may cross paths with this wonderful woman right here in town!

Visit Judy Blume at the nonprofit bookstore that she and her husband run in Key West. Books & Books @ The Studios of Key West was co-founded by the couple, and Blume can be found working at the store four days a week, including Sundays.

Tom Corcoran began his journey in Key West selling tacos on a 3-wheeled bike. Through his time of cycling around this magnificent island, he was able to capture the life the most overlooked. Corcoran became very close friends with singer/songwriter Jimmy Buffett.

From the life he saw on the streets of Key West to the natural passion Tom had for writing, he was able to create some VERY interesting reads. He wanted to open people’s eyes to the great island of Key West and tell of all the great things no-one knew in the form of mystery novels.

Rosalind Brackenbury, born in London, England moved to US in the early 1990s. She has resided in Key West for 20 yrs, and absolutely loves it. The water, birds and peaceful nature all play apart in being her muse. She has written more than 20 novels and books of poetry.

Her books/poetry falls under the genre of fiction, short stories and some books about great old Key West. Brackenbury books have been published in the UK, France and the US.

Key West has long been a source of inspiration for creatives, and it remains that way today. Key West is host to annual literature events, such as the Mystery Fest Key West. Our wide selection of Key West vacation rentals offers enough space for groups of all sizes and needs.